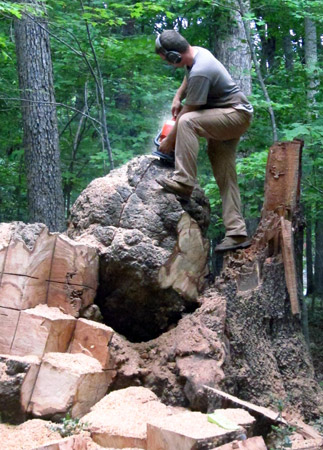 Jason Van Duyn was raised in Edenton, North Carolina, where he began woodworking in his dad’s shop at a young age.  He graduated from North Carolina State University in 2005 with a degree in Materials Science and Engineering.  Jason and his wife, Meredith, currently live in Raleigh.

Jason’s journey in fine woodworking started around 1996 by making a large wooden box for some trading cards.  He then made a variety of basic furniture pieces and a couple of other odds and ends during college.  The summer of 2004 was a defining time when he took classes with Ben Hobbs, an expert in fine period furniture.  Jason learned traditional hand working methods and gained an appreciation for period furniture.  Interestingly, that was also the summer when he began to work on the lathe, as one of the two classes focused on spindle turning.  Jason’s woodworking skills took a major leap forward that summer, and he made several other traditional furniture pieces with more attention paid to joinery and form.

Following college, Jason decided to pursue woodworking interests rather than a career in engineering.  In February 2006, Jason began working in historic restoration and broadened his woodworking skills in the areas of fine furniture, cabinet making, custom moulding, general construction, and flooring.  In 2007, Jason moved back to Raleigh and made high-end window and door units fitted with custom glasswork for an art glass company.  During that period, the work was unique and interesting but also ended quickly with the economic recession of 2008.

In 2008, Jason began working on the lathe to make simple bowls and crude hollow forms.  The next defining point in Jason’s woodworking evolution was in the summer of 2009 when he took a course from Mike Jackofsky on turning hollow forms, and that began the fulltime pursuit in the making of his turned items.  Since 2009 Jason has been turning full time with the occasional commission of custom furniture.

Believe it or not, yes, though the statement is somewhat in jest.  However, the roots of it come from the common ancestor to most all Van Duyn’s in America. Gerrit Cornelissen Van Duyn immigrated from Nieuwerker, Zeeland (Netherlands) to the Nieuw Nederlands in 1649, now present day Manhattan Island, New York City. His trade was carpentry, originally starting off as a ship builder, so we Van Duyn’s have been woodworking here in America since he immigrated. More information about the life of Gerrit Cornelissen can be found in the book “Gerrit” by Harry Roegner.

An Artistic Viewpoint: What I make and why?

I am a maker of contemporary turned woodwork, with the focus of my work in the creation of asymmetrical, irregular, and off-balance natural-edge turned wood sculpture, urn artistry, and functional wood turnings.  My artistic viewpoint is influenced heavily by how and where I was raised (a small, historic coastal town in eastern North Carolina) as well as my background in making traditional period furniture.  I come from an agrarian background so I appreciate the natural beauty of trees and the natural environment.  From my period furniture experience I have developed a strong appreciation of proper form, quality, and the developing of skill through handworking methods.  Thus I look to continuously improve my turning, hollowing, and finishing abilities, and I want that skill to be evident and visible in my work.

In some ways I consider myself a naturalist, or perhaps a landscape painter of the wood turning arena.  I make thin wall hollow forms from solid reclaimed domestic Southern hardwoods.  I focus on simple shapes and proper proportions so as to draw attention to the tactile feel, subtle textures, natural patternings, tones, and characteristics of the wood itself.  As I reclaim and salvage nearly all the wood I use, all of my work is created largely out of a desire to show a broader view of the grain and history of a tree.  Most people’s understanding of what wood looks like is more commonly a few fractions of an inch deep and at best and inch or so of the tree.  Creating turned sculpture straight from the tree, with a greater degree of depth, allows me to create objects that capture a more comprehensive view of any given species of tree.  Peeling away the outer layers of what is commonly visible to everyone leads to a unique experience even in the simpler and functional pieces.  Therefore I like to include the naturally formed voids or areas of bark inclusion in my work, as well as worm holes and spalting.  Natural finishes are also a must as I want the true look of the wood to stand out.