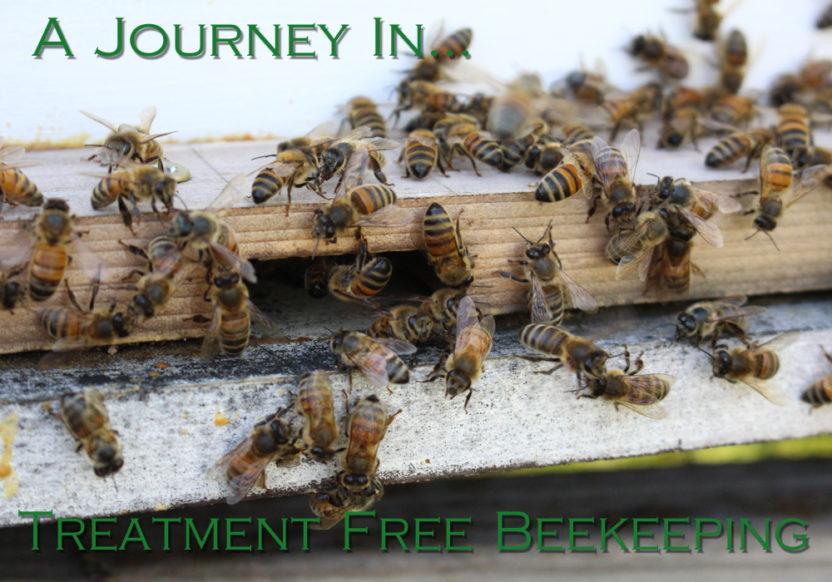 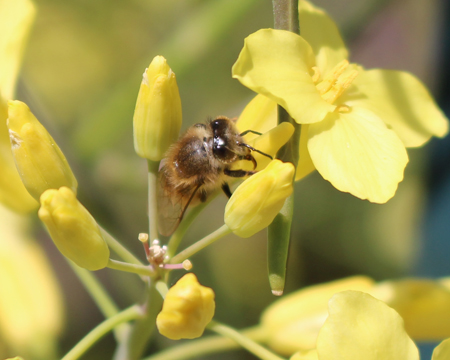 We all like North Carolina honey, and that honey comes from plant nectar.  Honeybees don’t make honey, or at least less of it, when there isn’t much blooming.  So, keeping bees really makes you pay attention to what is blooming at all times of the year.  Before I kept bees, the native plant bloom was taking place but it was all in the background for me.  In the past few weeks – Hollies, Black Cherry, Willow, Elm, and Wisteria have already bloomed.  Blackberry, Tupelo and Poplar are currently in bloom.

Now in the fourth week of April, the Tulip Poplar flow is just starting here in the piedmont.  I have seen some very mature poplars blooming for a little bit now.  Though by and large the bloom hasn’t come into full swing.  Back home, in the northeast part of the state, plants seem to bloom about 7-10 days behind the piedmont.  As nectar flows go, the poplar bloom is strong as it typically lasts around three weeks.  This lumps it in the category of major nectar flow.  Most plants don’t bloom this long or produce as much nectar. 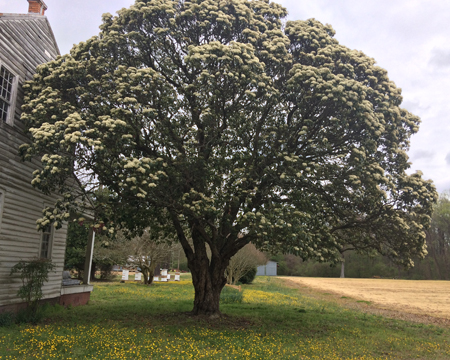 Generally speaking, plants that produce a major nectar flow tend to be trees, shrubs of decent size, or plants that grow in large swaths.  Either a plant is large enough to push a lot of nectar or there are smaller plants that are more numerous.  The majority of these plants tend to bloom in the spring time.  As such, in our state, the spring is a good time for nectar flows.  Many places however don’t see much nectar flow passed June.  There is a summer dearth in most parts of the state.  Dearth meaning a time of little nectar flow.  This is also when robbing is the most abundant.

Most spots, especially rural areas, do have some fall flow.  Primarily this is made up of Goldenrod, Aster, and a species of native Sunflower.  That being said, location is everything.  I find urban areas to have more limited nectar flows outside of the spring flow.  Unsurprisingly, development has led to the depletion of a lot of forage.  Nice weed free lawns in abundance don’t make things any better. 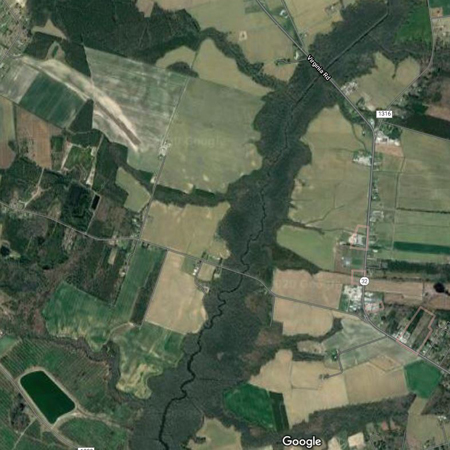 Back on the idea of location, it is possible to find areas that very localized honey flows take place.  Keeping bees near lakes, or large waterways, can be beneficial as its possible to pick up nectar flows from Gallberry and Buttonbush.  Sourwood in the mountains also comes to mind.  Looking at this aerial near my hometown you can see the creek running up the center of the image.  The area immediately surrounding the creek is low and swampy filled with very large Tupelo and Poplar trees.  The cultivated areas adjacent to the tree lines are all usually filled with Sage, Cotton, and Soybeans.  Additionally, the cultivated areas typically have stands of fall blooming plants that receive fertilizer runoff and strong daylight.  Those fall blooming stands can be large, dense, and are located around most fields.  It’s quite possible in many parts of eastern North Carolina to hit 3-5 major nectar flows.  That’s alot of NC honey. 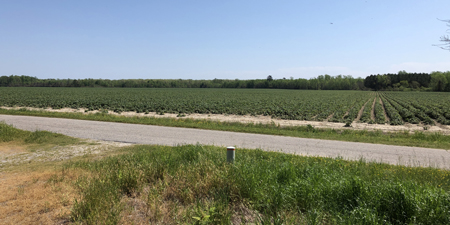 This year the sage field where we moved bees happens to be near this creek area.  Clary Sage typically blooms around the beginning of May and tends to last the whole month.  At the time we moved the hives we are likely to pick up the Tupelo bloom first.  Tulip poplar and Clary Sage will follow in the coming weeks.  All told there should be strong nectar flow for seven to eight weeks.  Last year we had about sixteen hives for the sage flow.  It was very dry and hot during the sage season last year, so not ideal conditions.  The honey was very thick coming out of the comb.  This year we have around 30 colonies so we will see what happens. 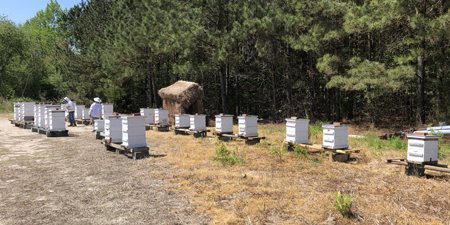 The piedmont bee yard is located near a lake, so in addition to the strong spring bloom I know there is some buttonbush growing around the lake.  This helps produce a nectar flow in the June time frame.  Outside of the sumac that blooms in late July, the summer dearth is pretty heavy.  There is a fall flow, though honeybees are mysterious; at times it’s obvious what plants they are working and most other times it’s not.  Currently it’s hard to gauge the strength of the smaller summer flows and the fall flow in the piedmont. 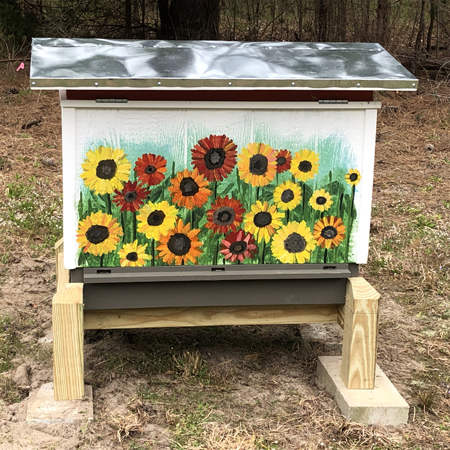 The Sunflower “Swarm Caster” painted by my daughter

Last year I started to experiment with insulated double deep frame hives, i.e. Lazutin hive.  The idea is this hive style promises to be superior to stacking (Langstroth) hives, but I’ll save that for another time.  If interested, read Beekeeping with a Smile.  Building on this concept, I made a double deep insulated hive that is split into three 6 frame sections just for the purpose of casting swarms.  I am looking to develop this idea to help automate the breeding process as swarms don’t require any beekeeper manipulation and they ramp up more quickly than splits.  “Ramp up” meaning the queen is already laying and the swarm comes with the right number of bees/resources to build out quickly. 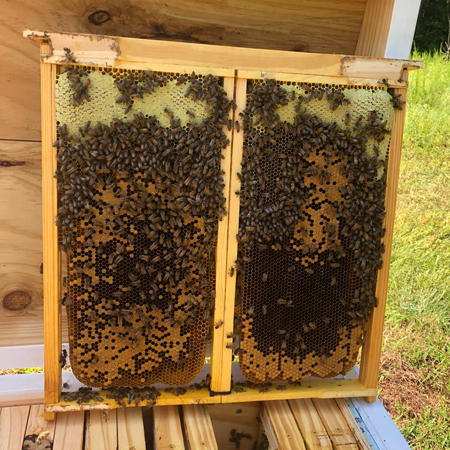 A double deep frame is basically two standard deep frames joined together.  Most people join the two frames top to bottom.  I opted to go side to side and fashion them with a new top bar as this still allows me to use my deep frames without modifying them.  Additionally, I can still use my extraction equipment.  The bottom frame in the top to bottom method usually requires cutting the ears off the bottom frame.

This year I made several swarm boxes that utilize a double deep frame and I decided to insulate them.  A standard 40 liter swarm box usually holds five frames and has several inches of space below the frames.  To accommodate a double deep frame it only requires the swarm box to be a touch deeper.  Using approximately the same volume I can fill that box with the equivalent of 8 deep frames.  This is a plus for me as I have had swarms move in and build right on the bottom of the frames and not in the frames themselves. 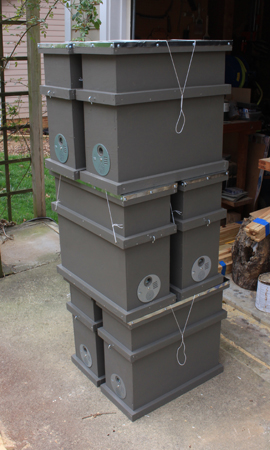 The main drawback in this build was the weight.  Since I made a double wall box with insulation in between it increased the width of the box and its weight.  The first set of boxes I made actually hold 6 double frames and those boxes really are heavy.  I suspect they will be used more for making splits in the future.  Originally I was thinking that i needed larger hives to overwinter more successfully, thus the 6 frame boxes.  I have since learned (reading Kirk Webster) that there are lots of people that over winter nucs in a 4 over 4 configuration very well.  Even in more northern climates.  So ideally a 4 double frame box is a better choice, and is what I made on my last build run. 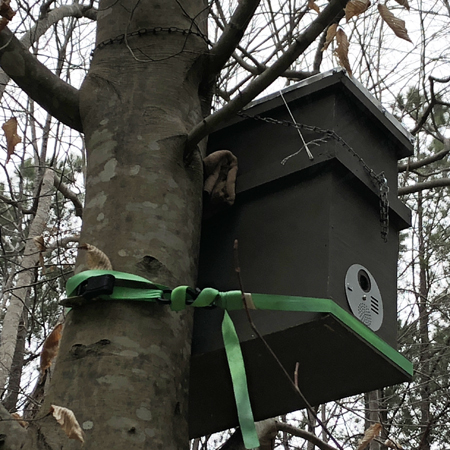 So… why insulate the swarm box at all, basically no one does this?  What I would like to achieve is a condition where I can catch a swarm and have them overwinter in that box.  This minimizes the amount of beekeeper intervention.  In the future, it also allows me to sell overwintered colonies more easily as the whole colony and box could be sold together.  The insulation also helps the colony thrive during the season and overwintering.

Advantages of double frame swarm box as I see them… 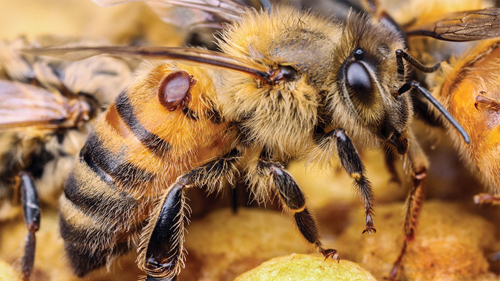 Treatment free beekeeping is basically a management style.  One that decides there will be no treatments of any kind applied to a honey bee hive.  In its strictest form, some consider feeding bees a treatment as well.  The majority of bee keepers put pesticides or other “organic” compounds on their hives mainly for the management of varroa destructor.  The varroa mite is a parasite that feeds and reproduces on honey bees/larva and can overrun a hive.  A hive or apiary run in a treatment free style relies upon developing survivor genetics, and as such most are very active in breeding and swarm catching.

It is common for an apiary to take many years to develop in a treatment free style as hive mortality rates are usually pretty high in the first couple of years.  Its been reported by many that first year mortality is 70-90% of colonies and then gradually improves as the beekeeper splits and breeds from the surviving hives.   I personally am expecting around 3/4 loss the first year, 1/2 the second, 1/3, 1/4, and so on… This passed winter was the first season where I haven’t moved the hives during the year and at the peak I had 16 colonies during the summer of 2019.  I overwintered 13 colonies with 5 surviving the winter.  My mortality percentages look to be right in line with expectation.  Of the survivor colonies, two were swarms caught in Wake county, two were colonies I raised, and the last a treated colony that I split in the summer.  The formerly treated colony looks to have barely held on so we will see if there are survivor genetics there. 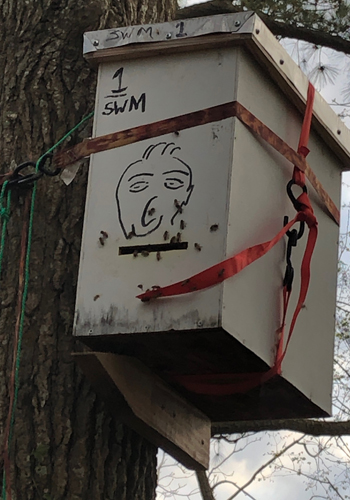 Spring is about to set in and I am back into expansion mode, which means splitting of surviving hives and swarm catching.  So what is swarm catching?  Honeybees make two things, honey and more bees.  A colony feels cramped when it fills up all the space in its cavity with said bees and honey.  A cavity in this case is void in a tree (most common), rock face, ground, house/structure, or a hive box.  When that happens a colony raises a new queen to take over and the old queen leaves with a portion of the colony to go find another space to fill up.  In our area (March-September) there are swarms flying around that most of us never even realize are there.

Catching a swarm is fairly simplistic.  The idea is to create an attractive home for the swarm to move in.  In practice this is making a box and hanging it in a tree.  Scout bees find the new location and if it is attractive then a swarm can move in.  A swarm box typically has a 40 liters volume.  Usually holds 5 frames, and is baited with lemongrass oil.  Lemongrass oil mimics the queen pheromone which is attractive to scout bees.  The idea is to make the box smell like bees have lived there before.  Adding old brood comb, facing the box opening to the south, and locating the swarm box near a water source increase the odds of catching a swarm.  Some advocate hanging the box high in a tree, although there are lots of people that have caught swarms low to the ground and even baiting old hives in their apiary.