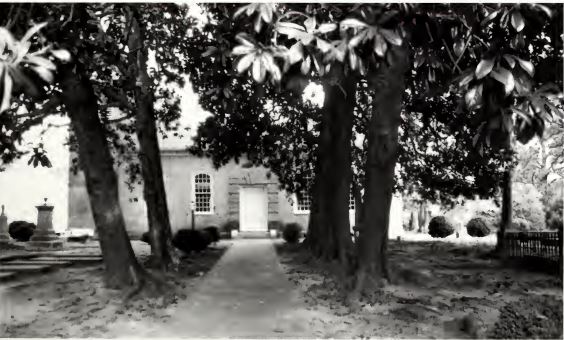 From time to time I come across wood that has a nice history.  Such is the case of a large magnolia tree that I acquired from St. Paul’s Episcopal in Edenton, North Carolina.  Magnolia (magnolia grandiflora) is a species that is typically long lived and very robust, not often dropped by strong storms.  My experience also shows it to be very resistant to disease and fungal decay.  All that being said, those qualities make it one of the more uncommon to rare species of tree that I work with, and that is not factoring in the size of this tree as well. 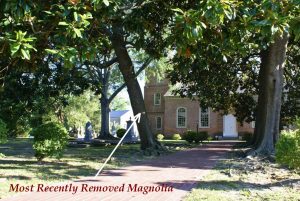 This magnolia is the third or fourth magnolia that was removed from St. Paul’s churchyard.  While the majority of the tree was still living, it had a severe lean and was removed to avoid risk of damage to any headstones beneath it.  Originally, there were six or seven magnolia’s planted by the Rev. Robert Brent Drane, sometime around the 1870s.  Rev. Drane acquire the seedlings for these magnolias from Calvary Church in Tarboro, and was St. Paul’s longest serving rector.  Currently only three of the original magnolia trees are still standing.  Interestingly, this magnolia was the last remaining tree standing over the ” Governors’ Graves”.  The term ” Governors’ Graves” refers  to the graves of several of North Carolina’s earliest governor’s and statesmen (i.e. Henderson Walker, Thomas Pollock, and Charles Eden) and their family members.  Eleven graves in total, they were reloca 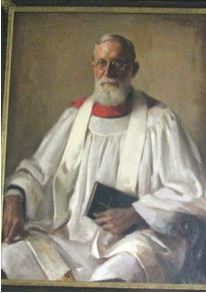 ted to St. Paul’s churchyard by the Rev. Drane in 1888 from various plantations around the Albemarle Sound and Chowan River.  The original graves were moved at that time due to encroaching waters and were at risk of being eroded away.  Its and interesting story that brings together two time periods in North Carolina history.

So far I have made a few pieces from the St. Paul’s Magnolia, and I have plans to make many more this year.  Magnolia is a medium to fine grained wood that is very light to white in color.  This tree also has a streak of heartwood that ranges in color from olive green to black.  It reminds me much of the tulip poplars that come out of swampy areas that have alot of black heartwood.  Most of the wood itself appears to be decently hard with the heartwood being exceptionally dense 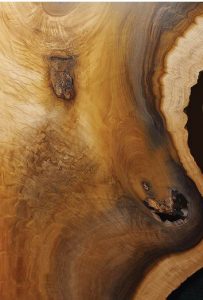 and hard.  I have in mind to use some of the heartwood sections for thread chasing, as I think it would be a good candidate.  The bark of the tree deteriorates fairly quickly which invites a moderate insect population, that will bore pretty far into the tree.  The sapwood seems to have some resistance to decay, in that fungal growth does occur but the wood does not decay quickly.  That is a bit different from other species whose sapwood are lighter in color (i.e. poplar, holly, etc.), although it does make for nice spalting contrasts.  I have also noticed that magnolia is a species that is receptive to red fungal staining.  Red staining is one of the nicer albeit more uncommon fungal staining that occurs in this region, and does not always take to every species of tree.  These magnolia trees are old and were pruned so they formed very large straight trunks.  The smallest of the last 4 (now three) is around 30-32″ in diameter.  I was able to acquire three to four sections of trunk each around eight to ten feet in length.  So there will hopefully be lots of pieces made to show off this wonderful tree, even ones that the beetles got to before I did.

There are a couple of nice publications that give more of the back-story about the church history and the trees as well.  They can be found here.