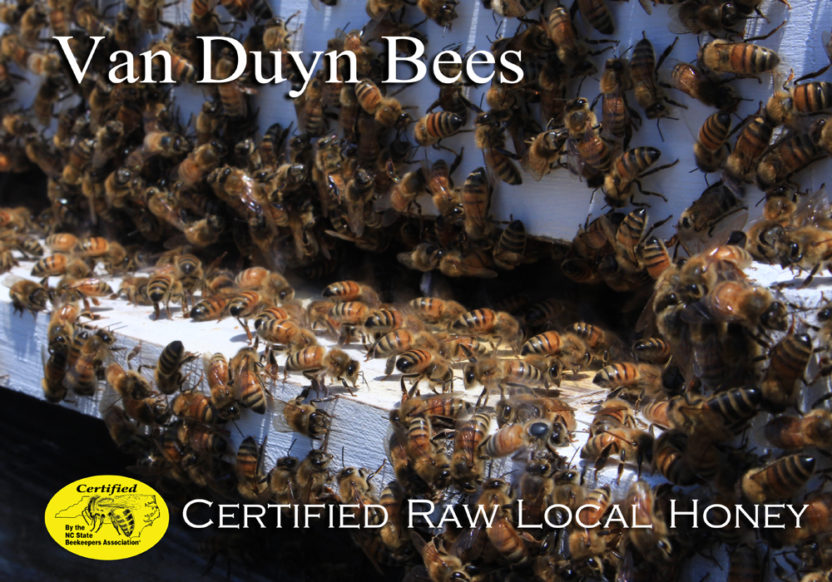 Looking for raw local honey near you?  Believe it or not this page is about raw local honey/beekeeping and not woodwork, well at least most of it isn’t.  I started keeping bees several years ago which makes for a nice compliment to my woodwork business.  I have built all of my hive parts, and I even have started experimenting with a newer hive style.  So this page is dedicated to all things honey bee.

This company name is Van Duyn Bees, and I keep several hives with my parents Dr. John Van Duyn and Gwen Van Duyn.  My dad is a retired professor of entomology from N. C. State for over 30 year working in extension.  He worked primarily in the northeast part of North Carolina doing entomological research on Cotton and Corn.

Where are we located

We have apairies in both Wake County and Chowan County.  The total number of hives varies at any given time but currently we manage approximately 40 hives.  We are producers of certified honey according to the NCSBA certified honey producers program.  Thus, if you are looking for raw local honey in Wake County, feel free to contact me.  I sell directly, as well as to a couple vendors around town.  When available we also supply the honey for the Herons and the Umstead Hotel gift shop.

What honey do we produce and How much

We consistently produce wildflower and Clary Sage honey, and at times we have been able to produce tupelo honey but that is a bit trickier to produce as there are several other nectar flows that overlap the tupelo bloom in eastern North Carolina.  I Currently have Clary Sage and Wildflower Honey available… pricing is below.  I have supplied an order form if you are interested in purchasing any hone. 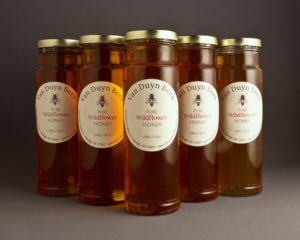 Wildflower honey is the standard raw local honey produced in this state, and is comprised of multiple nectar sources.  The color and taste of the honey will vary depending on the time of year it was made.  Weather conditions also play a factor as well, as honey produced at the same time of the year from one year to the next can even be different.  Cold weather in the spring or wet weather, for example, can either prevent foraging of one type of flower or the rain can wash the nectar out.  Additionally, most flowers don’t have long bloom durations, and the nectar may not be flowing constantly when the flower is blooming.

The majority of wildflower honey produced in North Carolina is produced in the spring (through the end of May).  In most years tulip poplar nectar is the most prevalent component of wildflower honey.  However, it is common to have nectars from red maple, sugar maple, dandelion, clover, blackberry, black gum, black locust, gallberry, holly, privet, persimmon, poison ivy, tupelo, and a variety of other native plants.

At other times of the year sourwood, buttonbush, basswood, sumac, sunflower, smartweed, and cotton comprise the major nectar sources of the summer time.  Goldenrod, asters, and native sunflowers typically make up the species for fall nectar flows.  Those species listed make up the usual nectar producing species; however there are many other native plants that are forageable.

During the summer, in most parts of the state, there is usually not sufficient concentrations of those plants to yield meaningful amounts of honey.  Many beekeepers rely on the fall nectar flows to build up the winter stores for the hives, so the harvestable yields in the fall are often not as strong as those in the spring.  That being said, beekeeping is very local so it is possible to hit multiple major nectar flows in parts of the state. 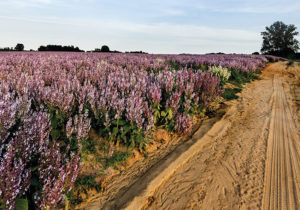 Clary Sage honey is a raw local honey variety that you may have never heard about.  Variety honeys are those that are mainly comprised of one floral source.  Other popular variety honeys include sourwood honey, tupelo honey, orange blossom honey, etc.

Clary Sage (salvia sclarea) is only grown in meaningful stands in a few parts of the world.  Interestingly, it just happens that one if not the main concentration of clary sage is grown in northeast NC.  Bertie County and the surrounding counties are the main growing blocks for this crop.  Clary sage is grown to extract the sclareol oil which is used extensively as a fragrance.  There is a nice article about clary sage growers in Our State a few years ago. 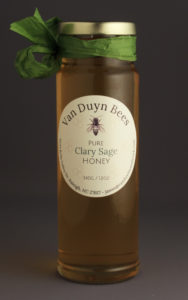 It happens that Clary Sage blooms for about 3-4 weeks starting around May 1st, and like all sage species is very attractive to honey bees.  The flowers produce an extremely high quality light in color honey that rivals sourwood honey and tupelo honey.  Like tupelo honey it has a high fructose to glucose ratio, thus it is slow to crystalize.  There are also distinct floral notes in this honey.  Like wine, raw local honey is very complex and can have several characteristics to it.  Clary Sage honey may be the best raw local honey in North Carolina.

What is the raw in raw local honey?

Raw, as you would think of fruit and vegetables, indicates the honey is in its most natural state.  The same is true for honey as raw honey is characterized as honey as it is found in a hive.  Thus raw honey is not processed or minimally processed.

So what does processing do to the honey?

Lets consider the alternative, that is supermarket honey.  The vast majority of commercial honeys are pressure filtered which removes all particulates from the honey.  All, or near all the pollen is removed enhancing the visual clarity.  Additionally, these honeys are pasteurized to increase shelf life.  Pasteurization kills off all the yeasts, bacteria, and other beneficial microorganisms.

Raw honey by contrast has approximately 22 amino acids, and a wide range of other minerals, vitamins, and enzymes.  Processed honey, through pasteurization wipes many of those amino acids and enzymes out.  Raw honey also contains many bioactive plant compounds, notably polyphenols and antioxidants.  There are many studies linking the benefits of polyphenols and antioxidants with reduced inflammation.  Again commercial honeys contain fewer of these compounds. 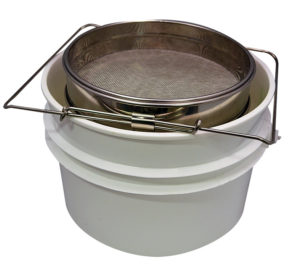 The raw local honey that we produce is uncapped, spun in an extractor, and minimally filtered at most through a 600 micron sieve.  The filtering is mainly removing small beeswax particles from the cappings.  As per NCSBA certified honey producers standards the honey is never heated beyond 110 degrees.  Heating is done occasionally to liquify the honey if it has crystallized.  Some nectars, based on their sugar ratios, crystalize more quickly than others.  Immersing jars of honey in a water bath at a low temperature to remove any seed crystals and increase shelf life is also beneficial.

Why is raw local honey different?

Raw local honey is different than what is usually available at the grocery store.  Commercial honey in many cases has been manipulated or processed so that its origins cannot be traced.  This is largely based on the findings by Food Safety News showing many brands carried in large retailers show little to no trace of pollen.

It’s been reported that honey coming out of China has been cut with various syrups, thus diluting the nectar composition.  As of 2018 the U.S. imports nearly a quarter of the international honey market, according to Bee Culture.  China, New Zealand, and Argentina are the largest exporters of honey.  It has also been speculated that honey coming out of countries like Argentina, Vietnam, etc. are proxies for Chinese to avoid the tariffs on Chinese honey.  If you have Netflix check out the documentary “Rotten.”  The first episode is on the global honey industry.

In a large way this is what prompted the standards for the certified honey producers program in North Carolina.  The labeling standards by the USDA are a bit weak across the board so various state organizations have taken steps to brand for better product.  Prior to keeping bees I used to buy honey labelled from a U.S. producer.  What I was unaware of at the time is that most of those companies are just packers and not primary producers.  Some buy from local reputable sources, and others perhaps not, as they have a lot of volume to fill.

The bottom line is that honey that is not ultra filtered, not pasteurized, and not comprised excessively of sugar syrups just flat out tastes different.  Are you skeptical?  Get a squeeze bear of honey from a major retailer and a jar of honey from a certified honey producer, and taste the difference.  It’s pretty dramatic and no comparison.

Other sections to come…

What is Bee Bread?

What are the health benefits of raw local honey?